Luca Carlevarijs (1663-1730) was among the first to paint realistic scenes in Venice, perhaps after being inspired on a trip to Rome where he saw others doing similar work.

The sites he painted are the major landmarks, but with fascinating detail in the citizenry that are included.  He painted the life of Venice, not just the structures or grandeur.  There remains a vitality of people living life as Venetians, and not a nostalgia tableau as some 19th and 20th C painters have rendered it.

Posted by Geocoded Art at 7:13 AM No comments:

Most great landscape painters who have had the opportunity  have tried their hand at capturing the magic that is the combination of water and architecture in Venice.  The range of their styles brings to our attention the fact that no site has only one appearance: our attention is always at work, so that every impression is an interpretation rather than a simple "observation".

Compare centuries of views and interpretations though a geo-organized collection of hundreds of masterpiece paintings of Venice, along the Grand Canal and tucked in quiet corners. 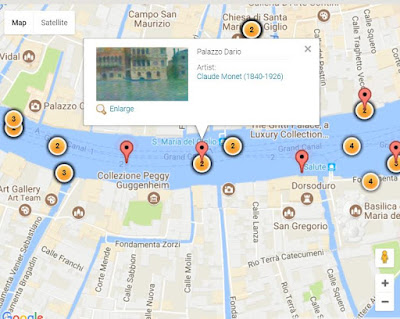 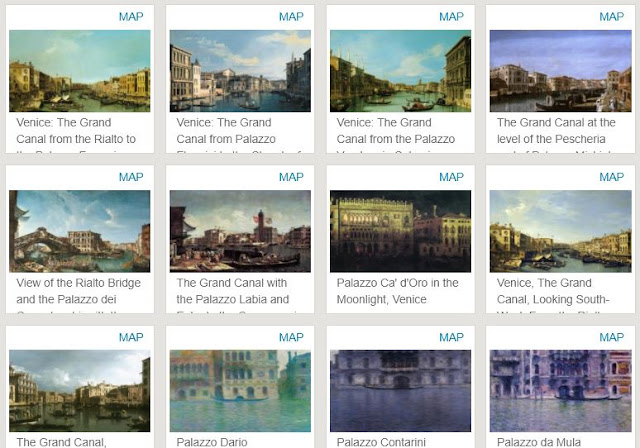 Posted by Geocoded Art at 5:32 AM No comments:

Francesco Guardi (1712-1793) paintings included many interiors, fantasy scenes based on ancient architectural ruins, and a few dozen views that reflect the real arrangement of structures in Venice (with varying accuracy).
Compared to others who generate keepsakes for tourists, Guardi works are more emotionally loaded, and are remarked on for their atmosphere,  If one could capture what the air would have felt (and smelt) like while standing on these locations, it might be associated with his frequently overcast skies.
Guardi paintings geocoded

Posted by Geocoded Art at 6:28 AM No comments:

Michele Giovanni Marieschi (1710-1743) paintings of Venice did not feature bright sunshine.  The skies tended to be brooding, there are not the shadows that lent depth and realism to the view of other vedute painters, and the water  surface does not have the shimmer that has enchanted later painters who came to see what the great painters saw.
He did his share of romantic capriccios, but seems not to have traveled outside Venice to paint views of other locations.

Posted by Geocoded Art at 6:20 AM No comments:

John Singer Sargent (1856-1925) is best known for his many many portraits of those who could afford to commission him, but he also relentlessly sketched his surroundings everywhere he went (and he went a lot of places).
There are many watercolors that provide just a glimpse of a place, but he did finished oil works of townscapes and landscapes across four continents; very typically his perspective was a close-up view of some details of a structure that other artists would have represented in an authoritative angle against a wide sky.
In natural settings he often includes figures in very un-self conscious relaxation; one would not call them poses.  But the attitudes he captures in their demeanor may be related to his ability to capture a personality in a single pose in a formal portrait.
The town views generally have a few of the citizenry in the frame, but if present, they seem to be there more as a matter of happenstance rather than an effort by the artists to show a representation of daily life at the spot chosen.

Posted by Geocoded Art at 9:53 AM No comments:

Rubens Santoro (1859-1942) painted intimates scenes of life on the canals of Venice: beautiful structures, ample sunshine, shimmering water surfaces, and not a care in the world. The buildings that he painted, which were never the monumental, state-structures so familiar from every other painters' work, have colors that dazzle against the blue skies and reflect alluringly in the smooth canal mirrors.

Posted by Geocoded Art at 5:42 AM No comments:

Antonietta Brandeis (1848-1926) painted scenes of prominent structures throughout Italy, being one of the few to include the city of Bologna in the her collection.  Otherwise she covered most of the views that have been painted  by many others over the centuries.
Her views generally are of clear skies and a crystal atmosphere; there is no overhang of lighting or conditions to influence your attitude toward what is before you; the very stones of the buildings must tell their story.

Posted by Geocoded Art at 5:40 AM No comments:

Use Maps to explore the sites of masterpiece paintings